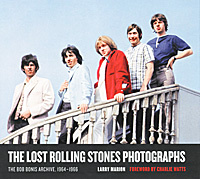 A revealing look at the earliest days of the legendary band, captured in a collection of personal, never-before-seen photographs, the largest single trove of such important rock images ever uncovered. When they first came to America in June of 1964, The Rolling Stones had been together for only two years and were almost completely unknown to U.S. audiences. They often played on bills with a variety of other artists, not necessarily as the headlining act, and often received lukewarm receptions. Many of these earliest U.S. shows did not sell out. But in the years that Bob Bonis photographed them, The Stones went from unknowns to one of the most prominent bands in the world. Documented in these photos is this seminal period when The Stones made their transformation into the world's greatest rock 'n' roll band. And during that time, few were closer to The Stones than Bob Bonis, the tour manager for their U.S. tours between 1964 and 1966. While on the road with The Stones, Bonis, a passionate amateur photographer with a keen eye, an innate sense of composition, and a deep love for his subjects, snapped some 2,700 photographs of the band?a remarkable collection that until now has only been known to family and close friends. Onstage, offstage, and behind-the-scenes, these stunning photographs show The Stones in an entirely new light, intimate and unguarded. Here are Mick Jagger, Keith Richards, Brian Jones, Charlie Watts, Ian Stewart, and Bill Wyman in casual moments, in rehearsal, in concert, in dressing rooms, on vacation, on the road. Funny, surprising, provocative, beautiful, these photos recall an unforgettable period in history and offer a fresh look at these soon-to-be legends at the beginning of their fame. This was the point at which early manager Andrew Loog Oldham began to position the band as the antidote to The Beatles, troublemakers dressed in leather and singing about the dark side of relationships. Comprised of images unearthed after forty-five years, The Lost Rolling Stones Photographs is a groundbreaking portrait of one of the most iconic bands of the twentieth century.