The Art of Discworld 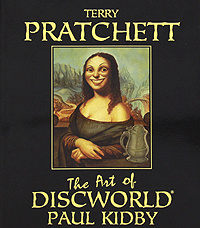 The Art of Discworld

The Discworld: a world bursting with magic, a land of contrasts and extremes that floats through space on the backs of lour elephants standing on a giant turtle. In the bustling metropolis of Ankh-Morpork, the oldest city on the Disc, you can find every luxury and perversion known to man or dwarf and a lair few yet to be properly invented; in the ancient empire of Klatch there are fifteen words for assassination. The kingdom of Lancre may be small, but in this case size definitely isn't everything; in the dark country of Uberwald, things do go bump in the night. The inhabitants of Discworld are even more unforgettable than the places. There are witches and wizards - Granny Weatherwax, Nanny Ogg and Magrat Garlick (now a Queen, of course), and those in training (willingly or otherwise): Agnes Nitt, Tiffany Aching; Archchancellor Mustrum Ridcully, the librarian, Rincewind, the Bursar: all play their part. There are great heroes, like Cohen the Barbarian and his Silver Horde, Sam Vimes, Captain Carrot and the men of the City Watch... and there are the ordinary folk like Cut-Me-Own Throat Dibbler, Foul Ole Ron, the Igors. And there's Death, and his increasingly extended family. The Discworld might have started out in the imagination of its Creator, Terry Pratchett, but over the past 30 or more books, it has taken on a life of its own. Here, artist Paul Kidby, steered by the author's words, takes his own voyage through the Disc, revealing, in glorious colour and intricate black and white, the cornucopia of characters that have won the hearts of millions of adoring readers the world over: Here is The Art of Discworld.