A History of India 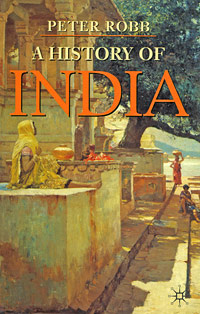 A History of India

This fresh and up-to-date interpretation of India's rich and extraordinary history, written by a leading authority in the field, explores themes in ancient, mediaeval and especially modern India. Peter Robb's accessible narrative analyses India's civilizations and its empires through the ages - including the Mughal Empire, the British Raj, and independent India to the present day - as they entangled with regional rule and heterodox cultures. A History of India: examines the relationships between politics, religious belief, social order (especially caste), environment and economic change; assesses, from c. 1860, British colonialism, Indian nationalism and nation-building, popular protest movements, religious revivals, and reinventions of caste, community and gender; discusses long-term economic development, the impact of global trade, and the origins of rural poverty. Centred around clearly expressed and well argued topics, issues and explanations, A History of India is the ideal introduction for all those with an interest in the drama and vitality of India's fascinating past. Формат: 14 см x 21,5 см.